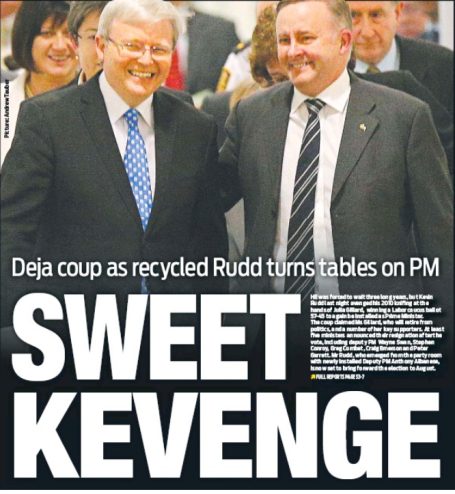 The machinations in Canberra this week have certainly damaged the brand of Australia overseas. I think any right-thinking man will wonder at what their Australian colleagues have done to their country’s leader!  A newspaper quoted from a Facebook posting: “As an Aussie living in Europe, this actually looks embarrassing”.

It says something about the toxic political goings on here that even a Columbian news publication has picked up the story in Latin America and labelled Julia Gillard as the “most bullied minister in the world.”

It reports that the Australian Prime Minister “has been criticised for the size of her breasts, hit by sandwiches and she has even been asked if her boyfriend is gay.” I’m not joking. If you haven’t read about it then just take note that a radio interviewer in Perth asked the Prime Minister of Australia if her partner was gay … live on radio. I believe he has since been sacked.  Can you imagine that same lack of respect for a country’s highest office being shown in America or the UK? It would be unimaginable. What are they thinking here??

Anne Summers writing in the Sydney Morning Herald about Julia Gillard’s exit speech under the heading Bullying and Treachery are clearly the new normal says “We are now, apparently unashamedly, a country where bullying, stalking, undermining and outright treachery are not just tolerated but the new way of doing business”. It’s an excellent read.

Wow, I certainly arrived in Australia at a crucial time. I’ve been here in momentous weeks before … I recall the November 2007 election which brought in Kevin Rudd who ended the long reign of the right wing Howard government and came in on a wave of optimism, much as did Tony Blair in the UK way back in 1997.  I joined most Australians in feeling optimistic about a new order coming into being in Australia with a leader fluent in Mandarin and willing to make a long overdue apology to the first nation people here. Bravo I thought .. this looks like interesting new blood.  It did not take long for things to go pear-shaped apparently.

Instead of Rudd completing a full-term, and beyond like Tony Blair, who successfully kept close ally/rival Gordon Brown at bay for a decade, Rudd was unceremoniously deposed in 2010. This week was the moment when all the chickens supposedly came home to roost.  The media talks about people not forgiving Julia Gillard for this act of treachery when she stabbed him in the back.… we’ll never know the actual truth but personally, I don’t think for one minute she led the action. There’s much talk here of faceless, nameless men orchestrating behind the scenes … I think it was more likely that a coup was staged because Kevin Rudd failed in his leadership of the party and the knife was put in Julia’s hand because she was the deputy.

At the beginning of this week when I arrived in Sydney, I started to get up to speed with what the media and colleagues were saying about Prime Minister Julia Gillard. It seemed her government was seen as a lost cause, everybody was panicking and that by remaining party leader, she was effectively handing the forthcoming election in September to the widely despised (especially among women) right-winger Tony Abbott. The intense personal attacks on the prime minister had also escalated. They made for very sad reading – my heart sank.

Much has been written in the press this week – you can imagine the kind of media frenzy on the TV and in the papers!  Let me pick up on a few insights that come to mind.

Julia was a successful Prime Minister…
… so say many political pundits and yet she was not loved by the electorate. It’s quite bizarre how that has come about. Even Kevin Rudd said  “She is a woman of extraordinary intelligence, great strength and energy…she has been a remarkable reformer and I acknowledge those contributions”.  This was spoken at his victory speech as incoming Prime Minister after Wednesday night’s coup. Her concession speech was referred to as magnificent and “revealed the person the public so rarely saw but that her loyal colleagues clearly knew”. (Read more from Waleed Aly about her integrity).

Even though the Labour party members detest Kevin Rudd’s impossibly dysfunctional style of governance and her colleagues like and respect her, that was not enough to save her from what turned out to be only a small majority voting in favour of saving their own necks. This was to give themselves a chance of survival at the next election because according to the Opinion Polls, Julia may be a good Prime Ministers but the voters can’t see that – they prefer Rudd, even though his party says he is a terrible leader. Go figure!   This is quite an extraordinary tactic…. Julia was toppled by media hounding and the nervous addiction to what the Polls said rather than bad policies (although there will be folks here who will argue with that).

A very productive term in office:  It is worth noting that writer Anne Summer’s article speaks of 532 pieces of legislation that had been passed by both houses and that was even in a hung parliament where everything had to be painstakingly negotiated. Many pieces of legislation were ground breaking, once-in-a-generation reforms that focussed on the environment, education and disability care. Miss Gillard also established a landmark Royal Commission on child sex abuse which is having a huge impact across Australia. That, and the successful steering of the Australian economy through a global financial crisis, seems to me to suggest she did well against great odds.

Some have asked if Australia was ready for a female Prime Minster. I know many women here are devastated at the way Julia Gillard has been treated and it could easily put off other women who wish to serve in politics but who fear the sniping and denigration that was a daily game for her enemies and many media opinion formers. There is mention of her mistakes (please name me a male politician who has not made any !!!)  and the possibility that she was not ready for the office. I think she did remarkably well for being thrust unexpectedly into the position almost overnight. She is known for her poise, calmness and being unflappable in leading a team who appeared to be obsessed with their own interests and agendas.

The return of the despised hero, Kevin Rudd ..
He is famously unpopular amongst his colleagues, in fact, he was so despised that they ousted him in 2010 and promoted his deputy. The standard political joke was that “Rudd was a man you liked before meeting and Julia Gillard a woman you liked after meeting”.  (Damien Murphy SMH Fri 28th). He is known for temper tantrums and for keeping colleagues out of the decision-making process. And yet he was able to talk in the kind of sound bytes that appealed to the voters and developed a relationship with the Australian public, making a particular point to appeal to the younger Facebook generation. He looked and sounded good but when push came to shove, in everyday politics behind-the-scenes he failed to work with colleagues, in fact he made life more difficult for them.  They hated him.

‘Recycled Rudd’ scream the front pages. Has he changed and learned his lesson?
I am not so sure. He spoke the words about being a changed man, and yes, he said he had learned his lessons about decisions being better made if done collegiately (he likes to use big and unwieldy words). What spoke volumes to me was the photograph on the front of the newspapers – his wife with a gleeful look on her face and adoring smile while he quite frankly was the cat who got the cream. There was no sobriety about this moment. He had been to the Governor General’s Residence to be sworn in and taken three generations of his family for what looked like a victorious celebration.
And yet, his stepping back in to office should not have been about “him”. Wasn’t it more about him stepping forward to be of service to the Labour party and the country? In doing so he had had to break a promise that he would remain loyal to Miss Gillard and not stage another leadership challenge (like he did in March) which is what he did on Wednesday night this week. He broke his promise and engaged in what many have called ‘toxic politics’ constantly fueling rumours against the PM, some say he did this for the last three years. In my mind, there is no room there for self-congratulatory grinning .. better a sober acknowledgement of the unfortunate circumstances around him making a noble gesture to save the party from annihilation.

Where was the decency, respect and kindness when it was needed?
However, if it was all about him reclaiming the ‘leadership prize’ which many pundits were saying he cherished, then of course this display of ego was entirely appropriate. Mr Rudd certainly has a way with sound bytes talking in the House on the first day of his 2nd Prime Ministership about how he wanted to champion “the politics of hope rather than the old politics of negativity” and called on his fellow politicians to “be a little kinder and gentler with each other”. Pardon me for sounding like an anti-Rudd campaigner (I’m not) but that is like eating up the whole apple pie yourself then saying, next time we really should share the apple pie out among everyone else. A case of too little too late … it is far too late to treat the country’s first female PM with decency, respect and kindness. I think it is a tad hypocritical. The opportunity for new politics could have happened while she was actually in office and not after she has been hounded out!

Key values missing from the political conversations here:
My final observation is about the lack of honesty and authenticity and the low regard for the intelligence of voters.  On the day of the coup, Wednesday June 26th, I was co-hosting a Women’s Circle where we were discussing feminine leadership … irony I know. We talked about the front page photographs of Julia Gillard knitting a woolen Kangaroo for the Royal baby.  As an ex-PR professional myself I did feel queasy when I saw the photo on the front page of every paper.  It was taken for the Australian Women’s Weekly and I think the idea was to appeal to women.

Authenticity is missing from politics – it so badly needs some
The scene is so out of character and rather far-fetched that it makes her look ridiculous … it is more of a caricature of womanhood. In order to show a different side of Julia, to make her more appealing to women, it would have been so much more authentic to have staged a picture of her at home sitting with a cup of tea, taking a few quiet relaxed moments before the storm of the election. That would have been believable, appropriate and authentic.

This ridiculous photograph was badly advised and manipulative and I think she only agreed to it because she must have been steered slightly off-course from her own balanced judgement by the recent buffeting she had been getting. It provided huge fodder for editors to write creative headlines – one favourite of mine was “purls before swine! !

Let’s see what lessons are learned in Australia about politics and the role of women in leadership.