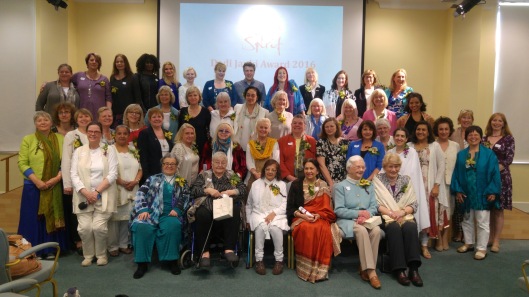 On Saturday I took part in a magical day that was created to honour Dadi Janki, the centenarian head of the Brahma Kumaris World Spiritual University (BKWSU). Apart from the fact she is an incredible leader and role model, it is quite unbelievable that she is still working in her global role at age 100. (And global it is with her 49,000 frequent flyer miles clocked up last year!). I was invited to join a team at the BK UK headquarters to help create something that would be a tribute and celebrate her near century of service … we know of stories where she offered comfort to the sick from the age of four, apparently a child prodigy in terms of caring and healing. So yes, it is almost 100 years of being of service, a mother and server to the world.

At the outset it was decided that offering our thanks to Dadi and sharing her accomplishments with others would be better focussed on the people who have been inspired by her rather than Dadi herself. She would have brushed that spotlight away. So the idea was born to take the number of her years and find “100 Women of Spirit,” women who had served their communities in a variety of ways in differing fields. This was not to be the top 100, simply 100 representing a much wider community of women who support the fabric of society and deliver change, often with trailblazing ideas and initiatives but are largely unrecognised. And with the BKWSU being the largest (and probably only) global spiritual organisation led by women, this was an opportunity to celebrate women in leadership roles. Our other criteria was that, like Dadi and her mission to be an instrument for God, their lives had been guided by spirit and their work accomplished by using their spiritual inner compass to achieve their vision. We did just that on May 14th when we had almost half of our nominated 100 women awardees attend a ceremony in London. Some of them described it later as “the best day of my life!”.

How did we find those 100 women?  Well, in truth it was not so easy. The trouble with highlighting those that have evaded the spotlight is that they are not going to be so visible! We decided to cast our net across the UK and ask all of the members of the Spiritual University and who run the centres, who they had noticed and found inspiring. Starting 8 months ago, we sent out a brief and then names started to pour in. We considered the different fields of law, education, social justice, healthcare, mental health, women’s empowerment, prison service, politics, social change, spirituality, religion, policing, community work …. we really wanted to cover the whole of society and particularly areas that are off most people’s radar.

We asked: “Who stands out in your community as a woman who inspires others in the way that Dadi has inspired you?”.  We were defining “Women of Spirit”  as:

•Women who are able to act for the greater good, not just benefitting themselves, but bringing benefit, upliftment or inspiration to others.

•They are working through the qualities of love, compassion, kindness, innovation, open heartedness and the ability to see the inter-connection of all things.

•They are motivated by something both within themselves and from beyond themselves.

•They are resilient in the face of difficulties, stay focused on their task and inspire others to do the same.

And so it came to be that 100 letters were sent out.  After many many discussions and research inside our judging panel we concluded our first ever list of unsung heroines who were to have their praises sung! ….at last!  Some of the women were actually well-known having already had an OBE, national recognition as a member of the House of Lords, or become high profile through their work. Many had laboured tirelessly for years without anyone outside their community seeing their efforts as being of particular value. But we used our eyes to see them … we held up a different prism so that what matters deeply could come into view.

It was planned that Dadi Janki would be at the event and personally hand out the award certificates that she had signed but at the last minute, a bout of ill-health kept Dadi in India. Her absence gave us a heightened reason to celebrate her and reassure her that a new generation of women are indeed taking her baton and are moving out into the world with determination and compassion.

To us Dadi Janki is a Trailblazer, having left India in 1974, speaking no English but with a vision and courage to bring the spiritual messages of the east to a more consumer-focussed western world. To say that she was ahead of her time is an understatement.  Dadi is an incredible example of a Vision-Holder who inspired thousands to create a global movement of meditation and self awareness programmes from just a handful of enthusiasts in London. With centres in 120 countries in just over 40 years that is an amazing achievement of her vision. Dadi as a Community Builder ensured growth of the organisation from a tiny handful of people who were nurtured by her careful tending. And finally, Dadi’s ability and special gifts for caring for others, listening and encouraging people ensured her role as Sustainer enabled the spiritual organisation would thrive, not just survive.

The 100 Women of Spirit, whose names and citations will be published shortly on Dadi Janki’s website are examples of one or more of these categories that guided us in our choice: Trailblazer, Vision-Holder, Community-Builder and Sustainer. This is what women do so well in the world to make society function healthily and bring the social change that communities are crying out for.

You can’t be what you can’t see, so this inaugural roll call of trail-blazing women of spirit will serve to highlight the important role women are already playing in the world and inspire other women to step forward, even with the tiniest and seemingly insignificant initiative they can bring change.