As a a former senior producer with the BBC Esther Stanhope has met them all  … the most senior politicians and the Hollywood greats. She has helped prepare them for interview and calmed their last minute nerves. She was confident, competent .. brilliant at her job. Then someone asked to speak on a stage about her role and she realised she was utterly terrified of public speaking. So, after leaving the BBC and starting her own business she developed mastery of a field she felt initially she had absolutely no confidence in.

And what a shining example she is of a Zero-to-Hero transition in a field of expertise. She was an absolute knockout of the speaker at our bimonthly women’s Business networking lunch run by Lady Val Corbett’s Network at the end of February.

Esther Stanhope has become a great asset to both junior and senior people in many organisations. She is particularly helpful if you feel highly competent in your job but not confident about being in the spotlight. Does that resonate with you? How many of us are confident in one area of life but not all? Esther wants us to be visibly brilliant as well as technically brilliant. Ever heard of Imposter Syndrome? She says “Get over it”, you are fabulous and if you believe you are, others will too.

Esther is a great speaker and presenter, and really funny too. But the goal is not to copy her and try to be like her ….. it is to have the skills to be our own authentic self and use her tips to put our unique personality into a situation or onto a stage with faith that we can come across well. If we can make that breakthrough in confidence then we can inspire others and become the best version of ourselves. Are

Speaking up and speaking out is a skill we can all learn .. and Esther says we absolutely should learn how to create impact on a stage, in a boardroom, during a pitch .. anywhere where we would like to have influence. She said “When you learn to speak in front of an audience, it changes your career, it changes your life. It attracts people to you immediately. It is unbelievably powerful. It transforms your businesses. It transforms you and your confidence levels, it just takes you to another level.” Yes there are times when you will be worried and scared but that means you are really living ….. you are stretching yourself!

Esther now speaks at conferences all the time and gets paid handsomely. She has proved to herself that she can do it. So she encourages .. nay she challenged us to do the same …. “Go out and get yourself speaking gigs … keep at it.”

“First of all” Esther said, “ Everyone has got good bits and bad bits. It’s about finding your good assets….  finding the your own superhero powers and really really working with them and are.”

That little voice of doubt on the shoulder,

Have you got one of these sitting on your shoulder criticising you? Esther gave hers a name …. she named her cruel inner voice Cyril. She recognises when he mutters at her and tells him to be quiet.  What can you call your critic?

TIP: tell yourself “I’ve got this .. I am nailing this” .. stop the negative internal chatter and reinforce yourself with good positive statements.

What is your confidence rating?

Esther gave us a scale of 0 to ten, with ten being the best. Where are we with our speaking skills she asked the audience of 80 women? At a recent gathering of Mumsnet women hoping to return to work, she said the average audience score was just 2.1 … our audience had an average of 6.2. Ok we are better but we need to aim for 9.8.

Have you experienced one of these problems?

Esther has tips for everything and gave us some good basics to boost our confidence and skill levels. She has written a book called: “Goodbye Glossophobia – Banish your fear of public speaking”. It’s a great read and somehow reassuring when she emphasises how nervous and horrible she used to feel. A million miles away from the delightful and relaxed woman who entertained us for 40 minutes.

She reminded us that we can make up so much nonsense in our heads …. OK so we left something out of the speech .. does the audience know, or care? they have got blank faces .. may be they are concentrating on what we are saying?

TIP: one of her first tips was “Do not imagine audience naked!”  ..  It’s not a pretty sight and does not help at all.

Start with the basics

The actual physical side effects of anxiety and nerves have a really quick fix.  The first thing that you need to do if you start feeling nervous in any situation, whether it’s public speaking, or a job interview or maybe you’ve been invited to do a webinar, is a breathing exercise.

TIP: Smell the roses, blow out the candle.

This is a really good quick fix, an instant stress buster. Simply breathing through 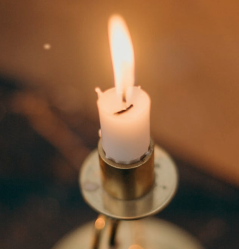 the nose and then slowly out through the mouth. Three times, for around about 45 seconds. You can rid your body of cortisol, the stress hormone; you can rid your body of panic in under a minute. Do that before you go on stage. Smell the roses, blow out the candle. There is loads of science to say this works and it immediately gets your heart rate down.

Don’t be the woman behind the scenes .. with the clever pen!

Esther loves to work with women and sometimes notices when working with major international firms and senior leaders, quite often, the women are writing the speeches… but not giving them.  They’re the ones with the vision, doing all the work ….. they’re the ones with the roadmap to the new regime. And yet it’s the senior guys that are doing this public speaking, chairing the meetings, being seen at the town hall sessions. Many women want to stay in background … their fear holds them back. We can’t let that continue. The only way we’re going to change that is by doing it ourselves. get out there and SPEAK UP. Be brave. Learn how stand in your power.

Esther’s challenge to you: Get yourself a speaking gig. Do more. Encourage other women to speak more.

The Simple Art of Telling a Story

So you say to yourself … “I’m not a writer .. I can’t tell a story!” Yes you can! As a human being you have a story. Stories are where it is at right now. They are SO important. You can draw on anything and the idea is to paint a picture for your audience so that you can connect with them.

This is a a very quick way to look good, sound good, and feel good. The power pose. The Amy Cuddy TED Talk explains the science behind taking a powerful pose. Her 2012 Ted Talk has had over 56 million views.. and counting. Watch it. Are

Esther came up with this acronym when supporting her nervous guests before live TV and radio interviews. Four tips for a quick fix.

P is for Posture

What to do with hands?

Option 1 – Keep your hands in front .. men could look like a bouncer.

Option 2 – Keep your hands behind your back, like Prince Philip

Option 3 – For TV you need are them to be in the square of the screen above the hips so do that and just hold on to your third finger to steady your hands .. like Tess Daly

O is for Oomph

S is for Speech

E is for smile

TIP: for connecting with the audience

Maybe you have been given a difficult subject or one that your audience has been told to listen to and which they fear or find difficult .. be open and honest, acknowledge how difficult it is for them, help them relax .. acknowledge and let them share their feeling honestly. This authenticity should break down any barriers you feel.