I think they do, judging by what I saw when I was in Australia.

During my last visit to Sydney I had the good fortune to spend time again with leadership expert Dr David Paul. The video series I did with him last year, with seven conversations on Feminine Leadership recorded on video, were extremely popular. We continued our conversation and another six videos have been created which I shall release over the next month. (Here is the link to the blog post with all seven of the previous interviews collated together)

What are we expecting from women leaders?
More positive dialogue needed ….

Kicking off our first session in November, was the discussion about the Australian Prime Minister Julia Gillard. Of course, as the PM she will be in the media all the time but I noticed how disrespectful some of the reporting about her often is in the papers. This may be increasingly true for many heads of state in the western world (a colleague of mine talked about how the largely Republican-slanted TV news during the election coverage referred to Obama without the use of ‘President’ in front of his name which they had normally done before …).  It does seems that more is expected of this first female leader in Australia and she is attracting much more criticism.

And then came the most downloaded political speech in history!

It is one thing to be forced to debate and defend policy decisions, it is quite another to receive a deluge of personal attacks as she says she has done.  So one morning in Parliament she hit back at Opposition Leader Tony Abbot and gave the famous misogynist speech which apparently has turned out to be the most downloaded political speech in history. In the Australian media it was given quite a bit of negative reporting but outside in the rest of the world it seems it was universally applauded. And obviously more so by women commentators.

As David Paul points out, she gave chapter and verse of what she said were comments and actions that she found deeply offensive ….. this is what you said, this is how you made me feel. It is quite unprecedented for a woman leader to speak out in such a strong way. If you watch the video of her speech (and there is a full transcript too, courtesy of the Sydney Morning Herald) you will see her refer to a placard that Tony Abbot apparently stood next to with the words “Ditch the Witch”. Needless to say she found that offensive.  He also suggests at some point that the unmarried Prime Minster make an honest woman of herself and on another occasion refers to the housewives of Australia doing their ironing. Comments like that are never going to go down well.

This speech followed some press reporting about inappropriate comments by a government minister and also much-talked about comments about how the Prime Minister’s father, who had recently passed away, must have “died of shame” because of how Julia Gillard is performing. You can’t quite believe that a public figure would actually say that!  I think Julia had had enough.   She took a very important topic about how society sees and treats women, and gave it a very public airing.

Many male politicians have what Julia Gillard calls “in my view such old fashioned and close-minded attitudes. I was not going to sit silent” 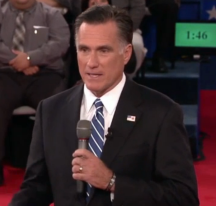 I don’t know opposition leader Tony Abbot – he’s a husband and father to daughters and I am sure he wants the best for them.   I think there are some underlying attitudes that are coming out which show the confusion for how women public figures and women in professional life are treated.  This also came out during Mitt Romney’s presidential campaign in the USA when he talked about being presented with “binders full of women” when he was looking for more female applicants for his cabinet. That comment, and others, set off a massive furore across the USA. It was very demeaning.

Thinking that women are ‘less than’ in some way comes from a culture where throughout history, women’s rights have been secondary. How women have subsequently been treated is all on a continuum.  Somewhere in the negative spectrum is a lack of understanding and disrespect, while shift further along to the other end and we see extreme behaviour of violence and complete subjugation.

Men need to be engaged in this conversation
This month violence against women has been brought to the fore by Eve Ensler’s campaign launched on Valentines Day called One Billion Rising.  There seems to be have been a wave of action across the planet where men and women are taking up this issue to stop violence by a new kind of activism based on celebration and dancing. I definitely think this is a much more creative and enrolling way to engage men in this conversation with women. For change will not come from women setting themselves against men … violence against women, and men, will only stop when we both work together to create the cultural change needed to make violence a thing of the past.

The treatment of women by corporate leaders, politicians, law-makers, police and out on the streets is really becoming a weekly conversation in the media with the most dramatic shift happening after the horrific rape in Delhi at the end of 2012.

Time for women to take leadership in change

David Paul ends this interview with a statement about strong leadership saying that “women are just coming to knowing what that power is”. Exciting times ahead … women finding their voice, connecting with their power, bringing about change…. yes it is time for us to really understand what power we have and how we can use it to help create a balanced, fairer society and a safe world. What does it take ? .. each one of us to step up and speak out whenever the opportunity presents itself …. or to decide what opportunities we ourselves will create.

Now there’s a thought …. what opportunities are you interested in creating?

LINK for document with full transcript of the interview