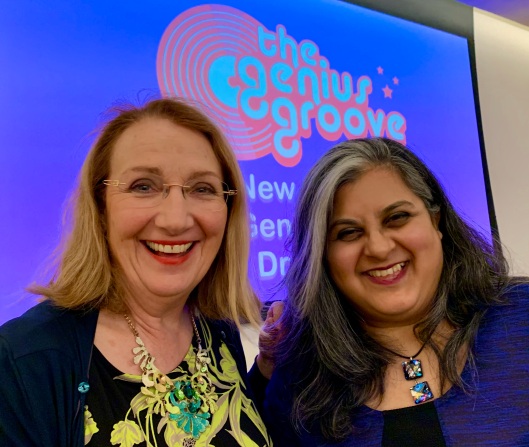 Dr Manjir Samanta-Laughton had an unusual start to her medical training.  In her first few weeks at Medical School she had what she described as a spiritual awakening. Instead of seeing the human body through the reductionist eyes of her trainers, where each part of the body is studied separately, as if it part of some clockwork system, she suddenly became of the human soul and consciousness, and how everything is connected.  This sudden vision put her deeply at odds with everything she was being taught but seemingly she managed to compartmentalise these two worldviews and qualified as a doctor.

Eventually she left medical practice and explored bio-energy therapy becoming a broadcaster, author and sought-after international speaker in what is known as the New Science. Her two popular books are Punk Science and The Genius Groove. With training and practise in medical science and energy work, Dr Manjir has become a renowned expert on the science of spirituality and consciousness looking at quantum physics, string theory and consciousness and how they relate to mystical experiences. She joined us as guest speaker for Conscious Cafe Skipton (just before Lockdown) to discuss how we find our Genius, highlighting the science that is now validating so much of what many of us intuitively know .. or have learned through mystical teachings and spiritual practice. It was an exceptional evening that we recorded. Dr Manjir has very kindly edited the video into a great educational film that you will get great benefit from. She has also opened up some of her online classes to our Conscious Cafe community. Here is the link for free access. These are highly recommended.

Dr Manjir reflected on the great divide of the 11-plus exams which us older folks remember. That was where one single exam determined your future .. pass it at age eleven and you were deemed to be clever and went on to a good grammar school. Fail it and you were labelled stupid and off you went to secondary modern school. Many children were deeply affected by this early division and labelling. The more we now know about how Genius is developed within us, the more cruel we can see this early selection of children was, or is, as schools potentially continue to test and stream children.

What actually is Genius?

Most of us think it looks like the wild-haired Einstein, possibly Hawking in his wheelchair or maybe the disturbing yet lovable Rainman played in the movie by Dustin Hoffman. In other words, a Genius is a remote other-worldly being who is more like a super-human calculator.  We still think that Genius is something you are born with and is linked to your genetics, in other words it is fixed. There is no current popular thinking that says you can become a Benius …. until now.

IQ is a worthless rating

The continual assessment by teachers searching for higher IQ is deeply flawed as there is no scientific basis for this testing. IQ tests originally came about as a way to help children with special needs. The same test that was around 50 years ago cannot still be used as the population has evolved. The test has been changed .. the bar raised higher. That does not make sense.

The mind, consciousness and the soul are seen as synonymous with the brain. Yet the brain i simply an organ in our heads. So much of what we know is still guesswork as the field of Neuroscience is in its infancy. Looking for patterns in brain scans is not going to show how we work. There has been a belief that the brain is fixed at birth and there is no further growth. New Science tells us that the brain is fluid …. it changes.  London Taxi drivers are not born knowing the routes .. they study “The Knowledge” and their brains change as a result of this intricate learning.

Something beyond the brain

We have to look beyond the brain and understand that something is coming in that changes it. It causes it to respond. Manjir points out that current Medical Science does not like it when things are invisible.

Who you are is NOT in your genes or because of them. It is a fallacy that your intelligence, your IQ and your personality is determined by your biology. This is such a pervasive scientific idea that it is not questioned. The Human Genome Project which is founded on the principal that everything about us is created by our genes, has come across a difficult truth. If the humble fruit fly has just 16,000 genes and a rice plant has 60,000 then humans must have many more .. likely over 100,000. Inconveniently for this theory, humans have only 24,000 genes. So the complexity and diversity  that we express cannot just be from our genetic makeup. That belief is old science. Seemingly, genes do not make us more intelligent. 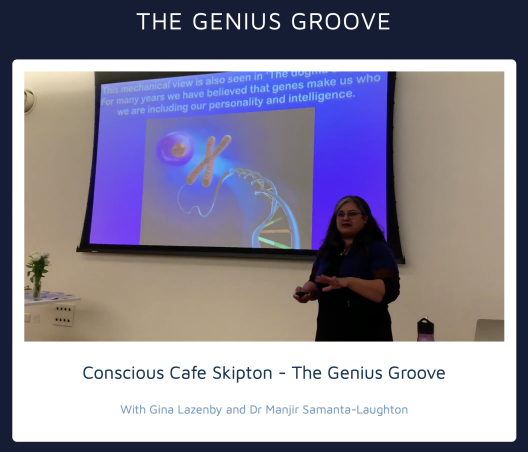 Dr Bruce Lipton, author of the celebrated book “The Biology of Belief” has done much to popularise the concept of Epigenetics. What he says is that there is something beyond the genes which changes the way they are expressed.  Each cell has the potential to be changed by something coming in from the outside .. and these could be thoughts, memories, beliefs and experiences.

What is actually controlling our genes?

In the Biology of Belief, Bruce asserts that our genes are controlled by our perception of our environment. This then goes in to our bloodstream, and the molecules that form then modulate the gene expression. He says that the hormones that run through our system are different according to HOW we react to something. In other words, perception is the driver of biology, not some innate blueprint.

Physics has had its own Revolution

Another revolution has been happening in Physics. There is nothing inside the atom. Nothing is solid. Nothing is fixed. Twentieth century physicists created shock waves with the discovery of Quantum Physics. Experiments have shown that reality changes depending on how you look at it.

Wave Particle experiments that have been well-documented show that the Observer affects the experiment. How can that be, that the results change depending on who is doing the experimenting and what they are thinking? It seems that our own consciousness reacts with reality .. to change it. And yet these new theories are not pervading popular thinking even though, unknown to most of us, the microprocessors inside the mobile phone in your hand uses Quantum Physics everyday. Scientists are beginning to agree that reality is stranger than first thought. Yet current Medical Science does not reflect any of this New Science thinking.

The Wave is a mathematical possibility of what the wave could be. It is your own observation that brings that particle into being. Your consciousness allows you to perceive your environment. The atoms in the brain come into being through an act of consciousness, of observation. Even though this research changes everything, Medicine and Physics continue to remain separate areas of study.

In the 1960s, the Consciousness Research Group determined that consciousness is fundamental to reality. Consciousness forms the ground state that matter comes from. Matter comes from consciousness, not the other way round. And that means you create your own reality. You are a conduit of consciousness. Finally, Physics has come around to stating what Mysticism has been saying for thousands of years. We have this knowledge in the 21st century yet we are not using it. This is a deeper aspect of reality that you have either not been taught or you have forgotten.

Quantum Physics says that particles can be anywhere. Particles pop into and out of existence all the time. This is the Quantum Vacuum which has so much energy it could boil the oceans in a second. What surrounds us all is actually a sea of light. And this sea of waves forms a pattern. At each point where the waves cross there is information. It is all holographic, which means that one part contains information about the whole. Even though mainstream science gets this, the media does not. This field of wave patterns contains all the information that has ever existed in the past, present and future. What the ancient mystics have called the Akashic Records.

According to the new science of Genius, your brain now becomes the conduit that can access all this information. That means everyone has a unique relationship and resonance to genius in this field of light that surrounds everybody and everything. You are continually reacting with this field of consciousness all the time in your own way. Your brain and your being brings through what is particular for you. Information is continually coming to you through the field. Your whole being is bringing in information, all the time. All you have to do is tap in to it. Simple as that!

More information is on the video recording with Dr Manjir where she explains how your passionate enquiry can switch on your Genius. Study further with Dr Manjir for free.